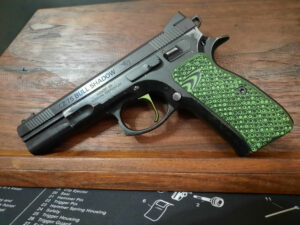 My first CZ now has new live as a Zombie build. When I first got this pistol, it was poor condition with no rear sight. I built it up in phases – here is a link to that. Later I built an SP-01 into an Open Major racegun, and swapped all the guts between the two. I decided to build a Limited gun and went with the Bull Shadow upper from CZ Custom. This build required some fitting of the slide (basically clearancing on the inside of the dust cover).

I started by dropping in all the cajun guts, the green SAO trigger going in first. I was able to do most of it by memory, getting confirmation hints on the trigger return spring and sear spring. It went fast than I had envisioned. I televised the build on Twitch, although nobody watched. Once I got the frame mods done, I turned to fitting the slide.

I just used files and sandpaper, around the sharpie and a Crayola marker. breaking the bevel on the dustcover allowed the slide to start going on, so I basically kept going. I left idiot racing stripes down the side of the slide but whatevs, going back I would have put thin tape on the slide and fit it that way. I was unsure if it was the dustcover or the slide rails. Started with the dust cover and eventually it started going back onto the frame more and more.

Testing commences today. Next ups are a magwell and S2 mag catch. With the long heavy barrel and awesome sights, this gun just points naturally.